Considering The Guo Technique for Carpal Tunnel? Read This First

By: Amin Afsari, DO 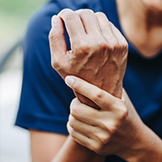 There are two common types of carpal tunnel release surgeries: mini-open release and endoscopic release. A third newer option is the Gou Technique. Of the three, The Guo Technique is the newest and least studied. It was developed in an effort to make a minimally invasive surgery into a micro-invasive surgery.

The Four Things You Need to Know Before Carpal Tunnel Surgery

My advice for anyone considering surgery to relieve Carpal Tunnel symptoms:

In my professional opinion, as a fellowship-trained hand and upper extremity surgeon, an aggressive marketing campaign is no reason to forego the option that is considered a best practice for Carpal Tunnel release. Like the Guo technique, the mini-open Carpal Tunnel release can be done under local anesthetic, you can drive yourself to the surgery, you may return to work the next day, and you may increase use as tolerated.  I’ve had patients ask me, “How would you want it done?” I tell them to stick with the tried-and-true solution, mini-open carpal tunnel release. It is the safest, most thorough, and reliable carpal tunnel release surgery available.