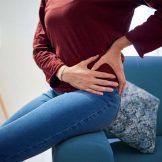 Are you experiencing pain in your hip, groin, buttocks, or thigh? Have you stared at your doctor confused when they said you had a femoroacetabular impingement? A hip impingement typically diminishes motion and the ability to do high-level activities, including jumping and running. Active adults may have hip impingement symptoms with day-to-day life, including pain with putting on shoes, getting in and out of a car, or standing from a seated position. Symptoms may come on with an acute injury, but more commonly gradually occur over time.

Here’s everything you need to know about femoroacetabular impingement (FIA)—or hip impingement—including symptoms, treatment options, and what to expect for recovery from this common hip injury.

What is a Hip Impingement?

Anatomy of the Hips

The hip joint is a deep-seated, ball-and-socket type joint. A cup-like socket called the acetabulum is on the left and right sides of your pelvis. The long thigh bone of your leg (femur) has a rounded head that fits inside the acetabulum. A thin layer of soft tissue (cartilage) covers the inside of the acetabulum and the femur head to prevent friction and the bones from rubbing together. Hip impingement means that the hip or thigh bone isn’t fitting together quite right, creating friction that is pinching or tearing the cartilage. The soft tissue that is most commonly injured by hip impingement includes:

There are three types of hip impingements or FAIs: cam impingement, pincer impingement, and a combination of both. All three are treatable and occur when the hip joint bones aren’t fitting together properly and cause damage to the structure’s soft tissue.

Cam impingement occurs when there is excessive bone growth at the head of the femur. Extra bone means the femur head isn’t allowing the hip joint to rotate smoothly. It could also mean the deformed femur head is rubbing against the cartilage of the hip socket, causing limitations to the hip’s range of motion, damage, and pain.

Conversely, a pincer impingement occurs when the socket’s (acetabulum) rim has excessive bone growth, creating friction against the soft tissue because the femur head can’t plug into the socket correctly. Like cam impingement, the extra bone growth causes pain and limits motion.

A combination impingement means the hip has acetabular impingement (pincer) and femoral impingement (cam). X-rays and MRIs can help your doctor determine which type of hip impingement you have.

Often, hip impingements are the result of abnormal growth beginning at birth. Hip impingements can also occur due to long-term repetitive motions like squatting and running in active adults. It’s important to look for the signs and symptoms of hip impingement to prevent further damage to the cartilage and bones of the joint.

Many impingements begin without any signs. As the impingement damages increase, you will gradually start to notice hip impingement symptoms. There may be sudden (acute) and chronic pain with certain movements. Any hip pain lasting more than two weeks, sudden sharp pain, or an immediate decrease in motion needs to be checked by a doctor. The most common symptoms are a loss of range of motion and pain. However, some people may only have one symptom while others may have all of them.

Limited Use and Loss of Range of Motion

The most common symptoms are a loss of range of motion and pain. However, some people may only have one symptom while others may have all of them. Hip impingement syndrome is a collection of one or more of the symptoms of hip impingement.

If diagnosed with femoroacetabular or hip impingement, there are both nonsurgical and surgical treatment plans. No impingement will heal on its own. If left untreated, a hip impingement may lead to osteoarthritis in the hip joint.

If the more conservative treatment plan doesn’t alleviate some of the pain, or if the severity of the impingement limits ranges of motion considerably, your doctor will likely recommend surgery.

Surgery would correct the abnormal shape of the femur or the acetabulum and repair the torn or pinched damaged tissue. Hip impingement surgery can be done via arthroscopy (a keyhole or small incision). Arthroscopy surgeries are often “same day,” so you can go home when it is over. These less invasive surgeries are also done to preserve the hip joint to prevent or delay a full hip replacement. However, the impingement may require a more extensive surgery that requires opening the hip for greater access to the joint and an osteotomy (removal of bone.)

Recovery time varies based on the type of treatment and the severity of the hip impingement. Hip impingement surgery recovery from an extensive surgery may require crutches for 6-8 weeks and a return to high-intensity activities and sports after 4-6 months.

Early intervention is the best way to care for any hip impingement injury or pain you are experiencing. If you experience any hip impingement syndrome symptoms, don’t hesitate to get in touch with a hip specialist at Midwest Orthopedic Specialty Hospital for a preliminary conversation.