The Risk of Contact Sports: What to Know About CTE Brain Injury 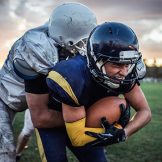 According to Boston University Research, “Chronic traumatic encephalopathy (CTE) is a progressive degenerative disease of the brain found in people with a history of repetitive brain trauma (often athletes), including symptomatic concussions as well as asymptomatic subconcussive hits to the head that do not cause symptoms.”

What Does CTE Do to The Brain?

Essentially, repeated trauma damages brain tissue. Over time, CTE brain injury sufferers experience memory and brain function problems, including aggression, depression, and dementia. CTE disease is controversial because much is still unknown about it. And the stakes are high for athletes and the business of sports.

CTE is associated with concussion, but research shows that people who have suffered lesser-grade head trauma can also develop CTE. People who have experienced repeated “sub-concussive” impacts—severe blows to the head without concussion—are at risk of developing CTE.

Athletes with CTE: Who is Most at Risk of CTE?

CTE brain injury is typically seen in athletes, soldiers who have served in combat, and victims of ongoing domestic abuse. Muhammad Ali, Frank Gifford, and Brett Favre are among the many famous athletes who experts suspect may have suffered CTE. Boxing, hockey, and football are all sports linked to high rates of CTE.

In 2017 a report was published in the Journal of the American Medical Association (JAMA) that studied the brains of 111 deceased NFL football players. Of the 111 specimens, 110 of the brains studied had CTE. In an in-depth story covering the JAMA report, the New York Times profiled many of the players whose brains were analyzed. The story concludes, “The NFL’s top health and safety official has acknowledged a link between football and CTE, and the league has begun to steer children away from playing the sport in its regular form, encouraging safer tackling methods and promoting flag football.”

Contact sports are a clear risk when it comes to CTE. However, raising awareness for the disease can help mitigate the damage the disease causes. CTE brain injury doesn’t occur after a single injury. While preventing all head injuries is ideal, sports teams can reduce the chances of CTE by identifying and avoiding unnecessary risks and behaviors. No helmet will prevent concussions, but advancements in technology provide us with better safety gear that absorbs shock more effectively.

Sports rules can also change for additional safety. Professional leagues such as footballers (soccer) clubs across Europe educate players and fans alike about the dangers of using players’ heads to move the ball. In an interview for BBC, brain expert Dr. Bennet Omalu urged: “Kids under the age of 12 to 14 should play a less contact form of soccer which we should develop for them. Kids between 12 and 18 can play but should not head the ball.”

Diagnosing CTE Brain Injury: Signs and Symptoms to Look Out For

For now, medical experts can only confirm CTE brain injury after death during autopsy. However, due to recent scientific discoveries, doctors may soon have a method to diagnose CTE in living patients. In September 2017, researchers identified a protein that may be a marker for CTE. The science is in its preliminary stages, and there is no existing treatment or CTE cure.

You should always see your physician after a head injury. CTE disease symptoms are similar to symptoms of many other neurological conditions. If you experience any of the following symptoms after a single head injury or multiple incidents, see your doctor immediately:

If you suffer a head injury and lose consciousness, feel extremely confused, vomit or experience a seizure, go directly to the emergency room. Head injuries can be fatal and may not seem as serious as they are; seek medical attention immediately.

Protecting the Brain from CTE Disease

One of the most effective means of preventing sports-related injuries is education and appropriate safety gear. Even though helmets cannot prevent concussions, always wear protective equipment when participating in contact sports. Helmets protect the head from other injuries and can lessen the severity of trauma. Downhill skiing and recreational bicycle riding are examples of activities that have positively progressed over the years. Less than fifteen years ago, it was uncommon to see skiers and bikers wearing helmets. Now, it’s the norm. Other activities such as skateboarding and figure skating still don’t require helmets—but should.

A lesser-known means to protect the head is to build neck strength. The National Center for Biotechnology Information (NCBI) is currently conducting a study to determine how strengthening the neck muscles can help reduce brain trauma. In an abstract about the study, NCBI notes, “Neck strength, and improvement of neck strength will be compared between concussed and non-concussed athletes to determine if neck strength can indeed reduce the risk of concussion.

Building awareness about CTE and head trauma with coaches, parents, and sports fans is an effective way to help prevent the disease. Although scientists continue to evolve their understanding of CTE disease, the underlying fact is that repeated trauma to the brain can cause Alzheimer’s-like symptoms. Simply increasing the general public’s baseline understanding of CTE brain injury will likely result in more care and prevention.

Are you a coach? Parent of a student-athlete? Pro athlete competing in a compact sport? If you have any questions or need further resources about CTE, please contact our Concussion Care Team. We are here to provide information and share our medical expertise to raise awareness about this challenging disease.