Home / Blog / Orthopedics / Why Do I Feel Calf Pain After Running?

Why Do I Feel Calf Pain After Running? 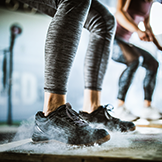 Almost all healthy, active people who participate in vigorous activity experience some sort of cramping or calf pain at some point. This cramping and numbness or tingling are known as exertion compartment syndrome. It is more common in athletes who participate in activities with repetitive impacts, such as running. This typically results in an inability for these individuals to improve or maintain their sports performance.

How is Exertion Compartment Syndrome Diagnosed?

The gold standard for diagnosing exertion compartment syndrome is compartment pressure testing. Saline is injected into the affected muscle compartments and pressure is measured both at rest as well as after exertion.

What is the Recommended Treatment for Compartment Syndrome?

If you are willing to reduce the amount of aggravating activity, symptoms will generally subside. However, it is common for symptoms to recur as soon as the aggravating activity is resumed. Initially, cross-training should be encouraged, including other compartment syndrome treatment options like physical therapy, massage and changing improper training mechanics. When these fail to alleviate symptoms, surgical fasciotomy is considered which involves cutting into the affected muscle compartment casings to open and thereby release the pressure. Surgery is often very effective in returning most of those affected back to their activity.